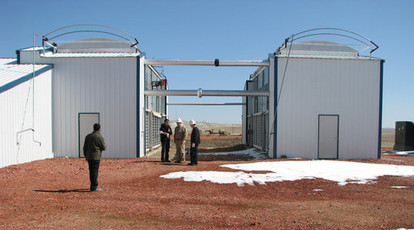 The team took off-the-shelf geothermal generators and hooked them to pipes carrying boiling waste water. They’re set to flip the switch any day. When they do, large pumps will drive the steaming water through the generators housed in 40-foot (12-meter) containers, producing electricity that could either be used on site or hooked up to power lines and sold to the electricity grid.

Sourced through Scoop.it from: www.bloomberg.com

>”Oil fracking companies seeking to improve their image and pull in a little extra cash are turning their waste water into clean geothermal power.

For every barrel of oil produced from a well, there’s another seven of water, much of it boiling hot. Instead of letting it go to waste, some companies are planning to harness that heat to make electricity they can sell to the grid.

Companies such as Continental Resources Inc. and Hungary’s MOL Group are getting ready to test systems…