Posted on February 27, 2015 by catherinehislop 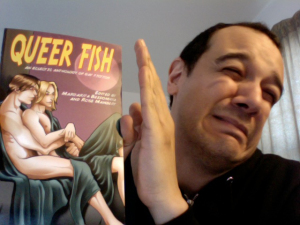 I…have to read this book from Pink Narcissus Press?

This rain follows an interesting confluence of events shaping the atmosphere of our hyper-mediatized mass media world. In order to explain I’ll have to move in reverse chronology of the happenings this week.

You see, K. Tempest Bradford has offended a lot of people by issuing a challenge to read authors other than white, cis, straight males for a full year. This came after her being called out for only noting books by non-white, non-cis, non-straight male authors in her online opinion column for a full year. Based on the mass media developments preceding these articles the backblash against Bradford is not altogether unexpected. People feel that Bradford is out to restrict their ability to read what they want, and to remove white, cis, straight males from the bookshelves, that she is out to oppress them.